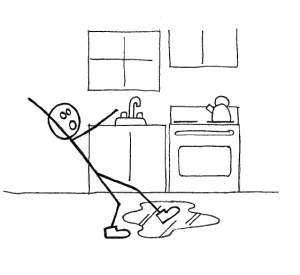 The Canadian Centre for Occupational Health and Safety reported 42,000 injured workers due to fall accidents. From that, 66% were of falls that happened on the same level due to slips and trips (Association of Workers’ Compensation Boards of Canada, 2011) and were due to the too little friction between the footwear and walking surface often caused by wet or oily surfaces or occasional spills (Association of Workers’ Compensation Boards of Canada, 2011). This demonstrates that there is a huge need for research to be put into the testing of footwear on common slippery indoor surfaces.

Learning from the results and concepts from the winter footwear testing, we developed a protocol for indoor footwear which involves participants walking up and down different common indoor surfaces and contaminants. After each successful trial, the slope of the room was increased by 1° until the participant experienced a two-foot slip. That maximum incline is the “critical angle” for that footwear and surface combination.

In collaboration with our partners, we have begun testing indoor footwear and recording the critical angle of the footwear for each combination of surface treatments.

The testing of indoor footwear will give us more insight in creating slip resistance footwear but moreover, using our results we can use a labelling system to make consumers aware which set of footwear will increase their balance and safety with the overall goal to reduce the number of slips and falls experienced.